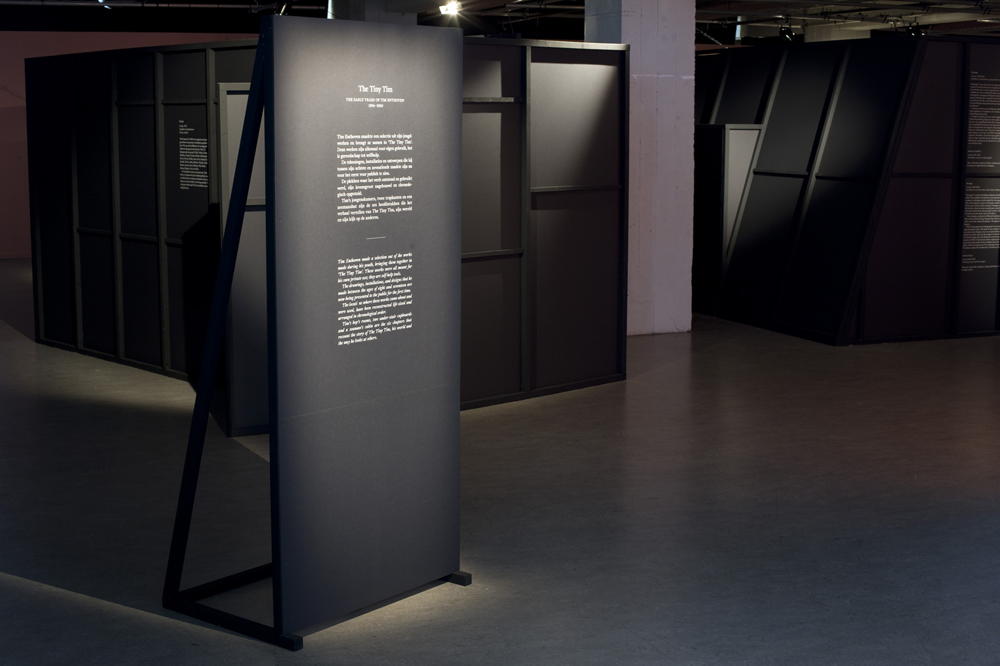 'The Tiny Tim, The Early Years Of Tim Enthoven, 1994 - 2003' was first exhibited in MU Gallery Eindhoven during the summer of 2012. Below are pictures of the exhibition and the integral text as shown during the exhibition.

Tim Enthoven has made a selection of works that he made during his youth, bringing them together in ‘The Tiny Tim’. These works were all meant for his own private use; they are self-help tools.

The drawings, installations, and designs that he made between the ages of eight and seventeen are now being presented to the public for the first time.

The locations where these works came about and were used, have been reconstructed life-sized and arranged in chronological order.

Tim’s boy's rooms, two under-stair cupboards and a seaman’s cabin are the six chapters that recount the story of The Tiny Tim, his world and the way he looks at others. 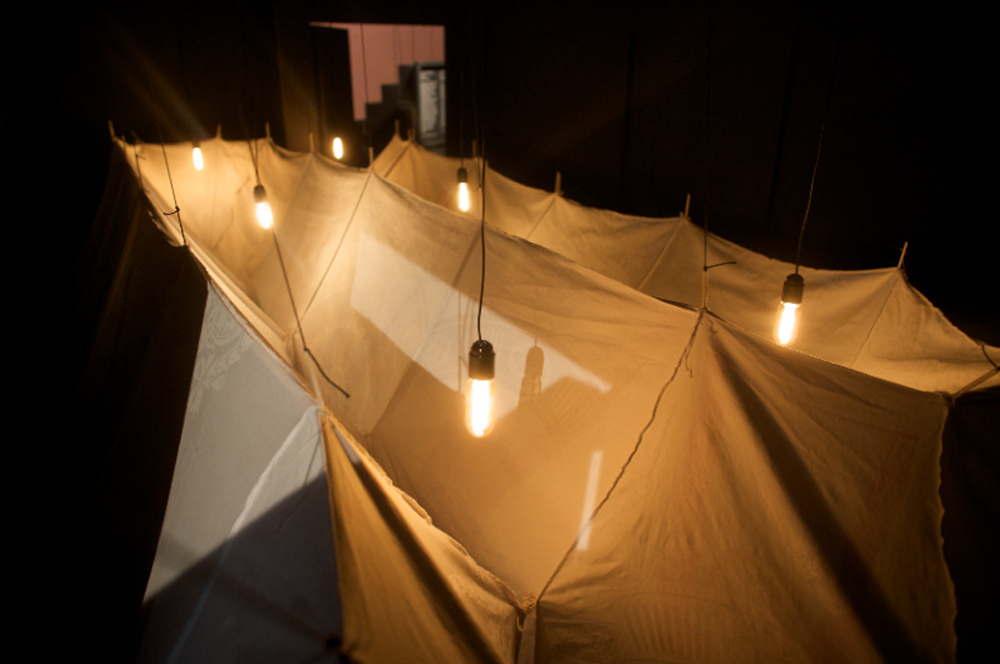 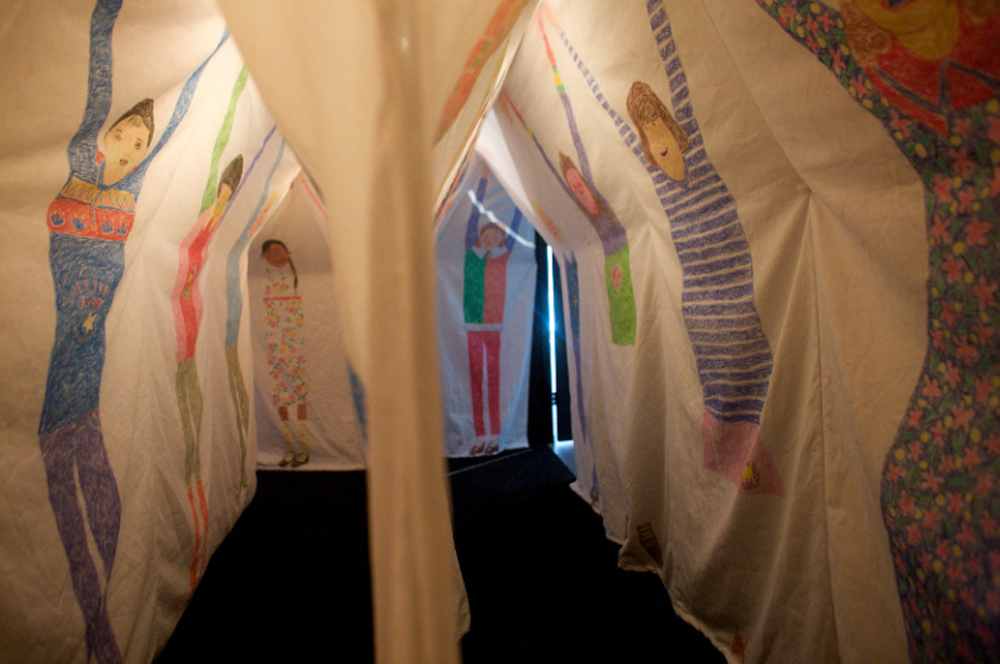 The installation forms a tunnel to Tim’s bed, and is based on the children’s game in which a child passes through an archway formed by two rows of other children, and after passing through, joins in at the end of the row. After a few weeks, Tim dismantles the installation and stores it away. 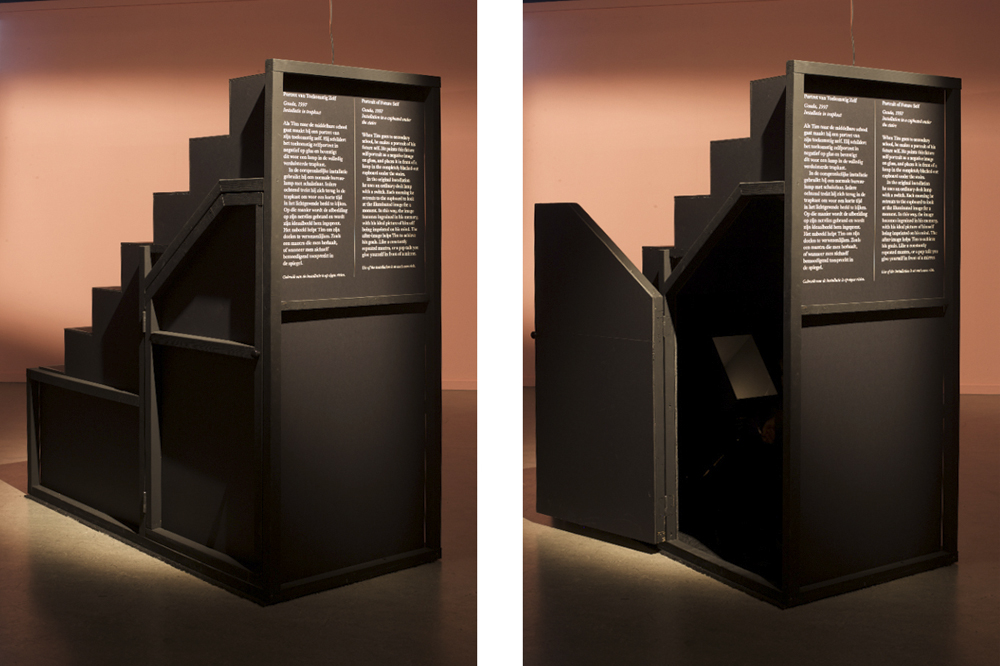 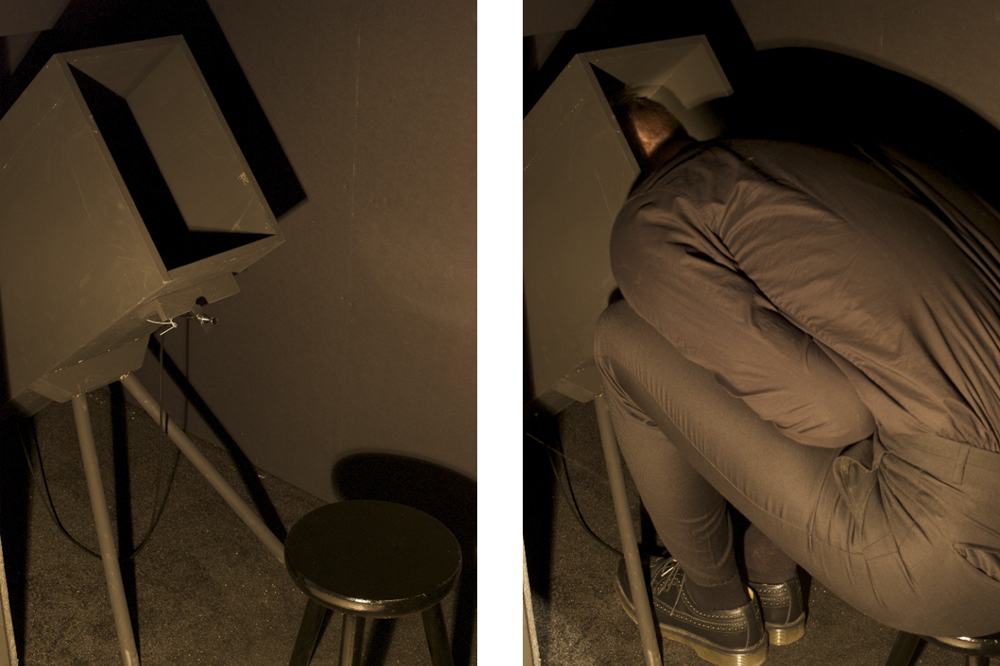 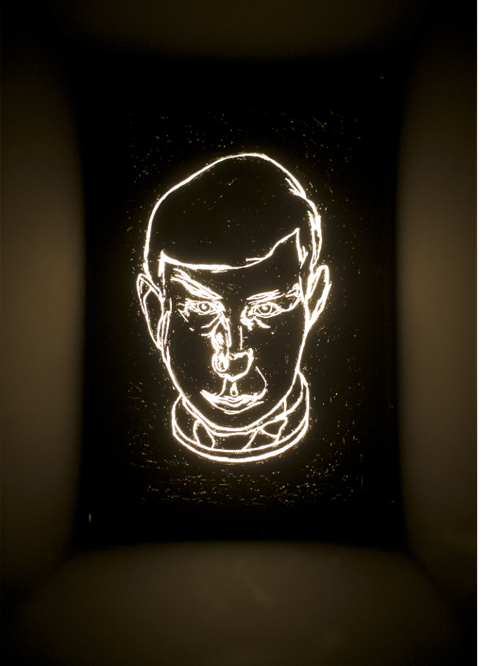 Portrait of Future Self, Gouda 1997, installation in a cupboard

When Tim goes to secondary school, he makes a portrait of his future self. He paints this future self-portrait as a negative image on glass, and places it in front of a lamp in the completely blacked-out cupboard under the stairs.

In the original installation he uses an ordinary desk lamp with a switch. Each morning he retreats to the cupboard to look at the illuminated image for a moment. In this way, the image becomes ingrained in his memory, with his ideal picture of himself being imprinted on his mind. The after-image helps Tim to achieve his goals, as a form of autosuggestion. 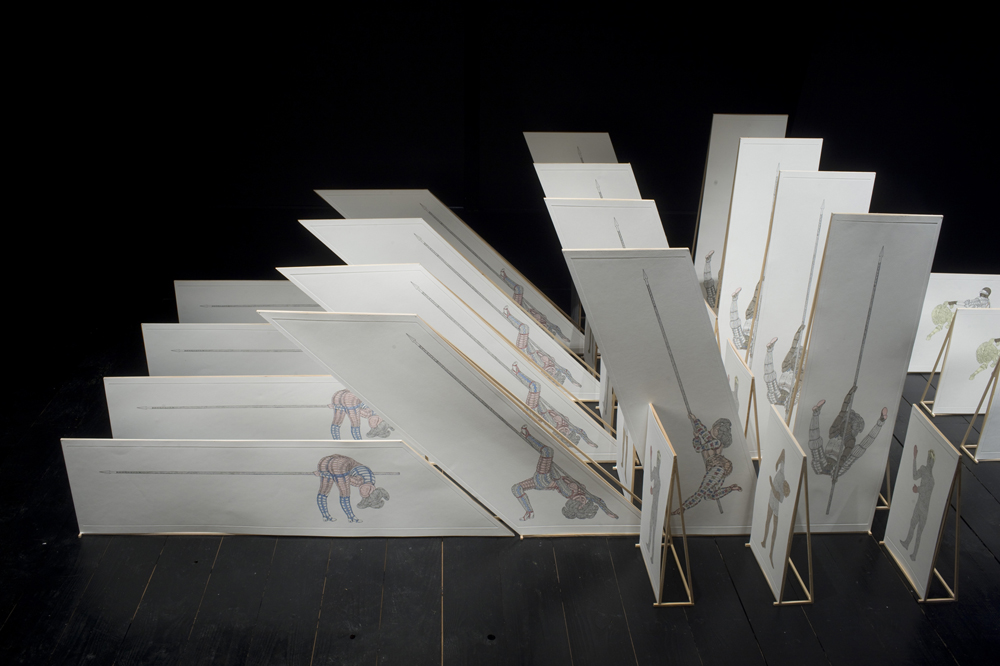 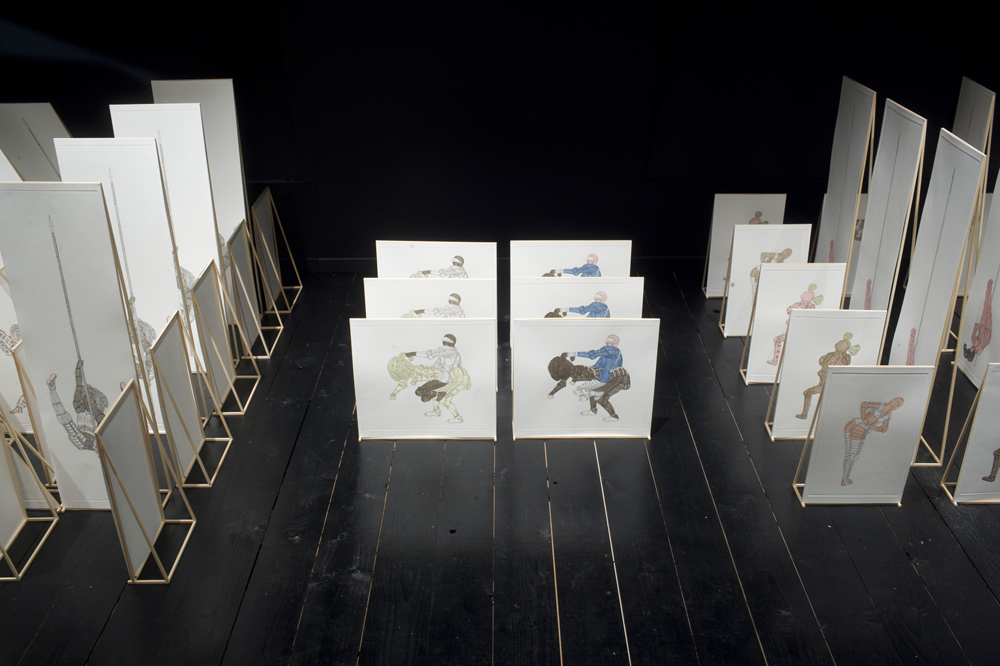 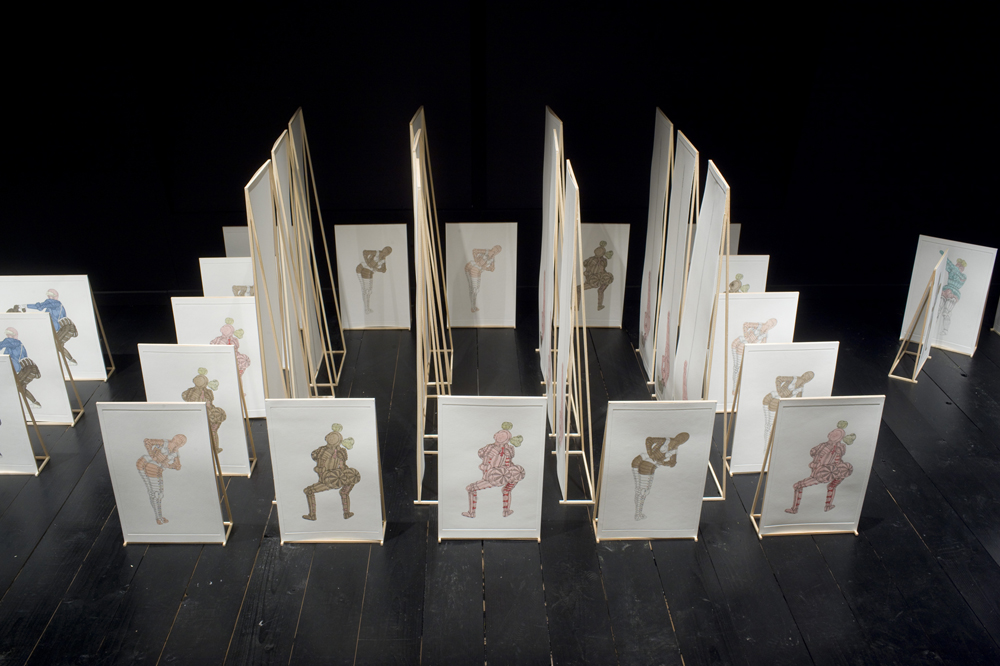 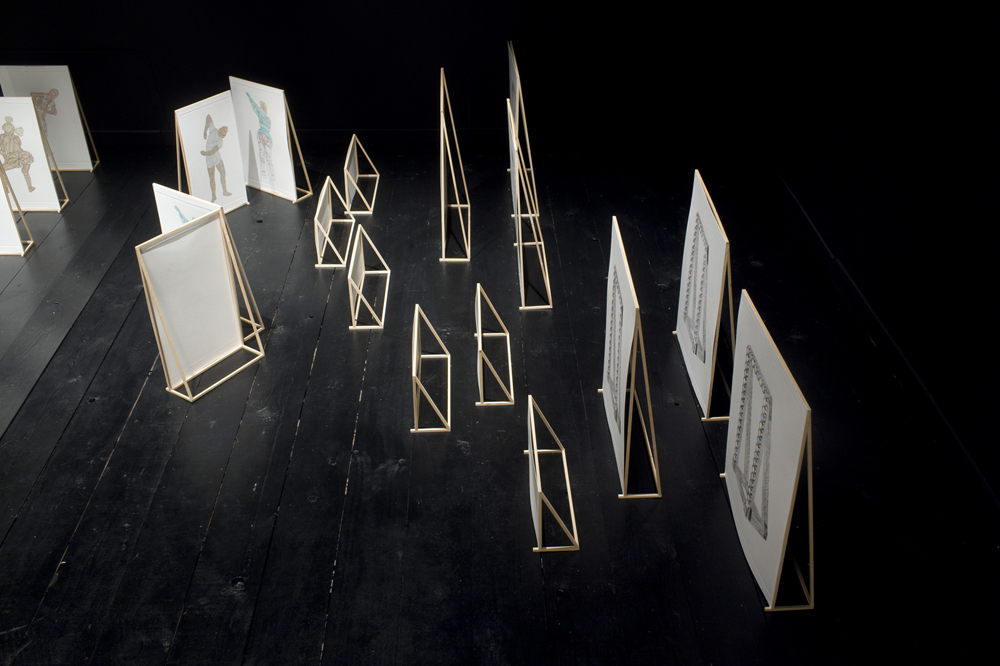 ‘Strategy’ is a series of etchings of figures and objects in which Tim combines his interest in seventeenth-century weaponry techniques and the night life of young people. The various figures are part of strategic combat formations in his room. In this way he conceives strategies to be used in the disco, where he never actually goes, and which he only knows about from other people’s stories. The images are based on iconic dance styles and objects.

The etchings are placed in different locations on the floor, their positions being changed from time to time in order to test the various formations. The figures form two squares.

When Tim acquires an etching press, he can start reproducing his work. This leads to the creation of an extensive series of figures over a two-and-a-half year period. He makes and uses these figures in the attic room in which he sleeps after the family has moved house. In the summer of 2002, Tim destroys all the original prints. New prints have been made for this exhibition from the copper plates which were preserved. The colouring is based on a few photos and on the recollections of Enthoven himself. 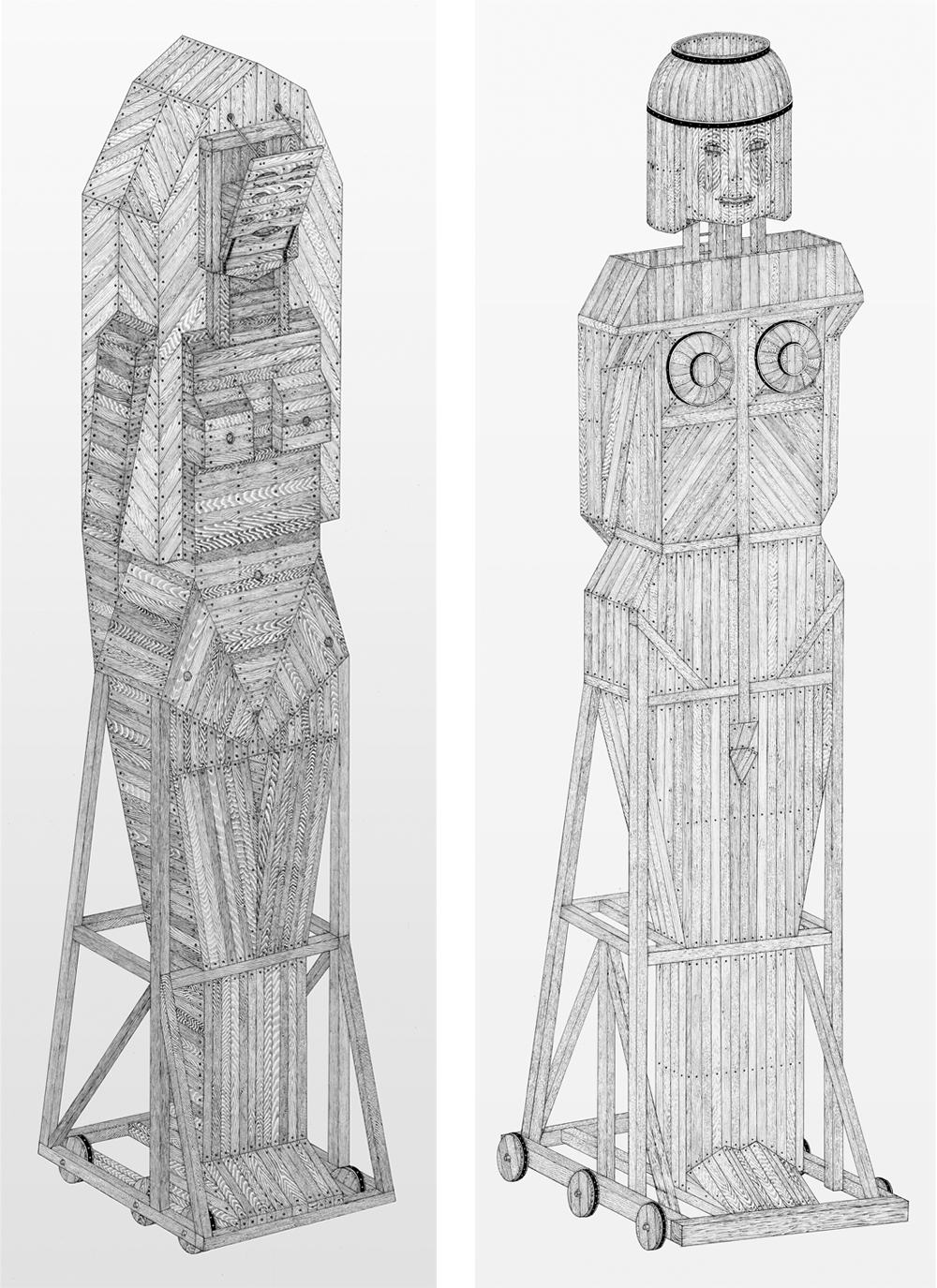 Design for ceramic elements in a gas fire, executed in ceramics by Jonas Lutz in 2012

The design for this gas fire is the first applicable design that Tim has made. It is specifically intended for the unused fireplace in the room in the house in Hoogeveen where Tim spends two weeks during the summer holidays.

The design is inspired by the fire in De Hemel, a bar in Volendam, which took place on New Year’s Eve, 2000 - 2001. At the time Tim did not yet have the skill to execute the figures in ceramics, but he made comprehensive design sketches for the modules. These have since been produced in fireproof ceramics. The modules are an alternative for the usual ceramic logs. 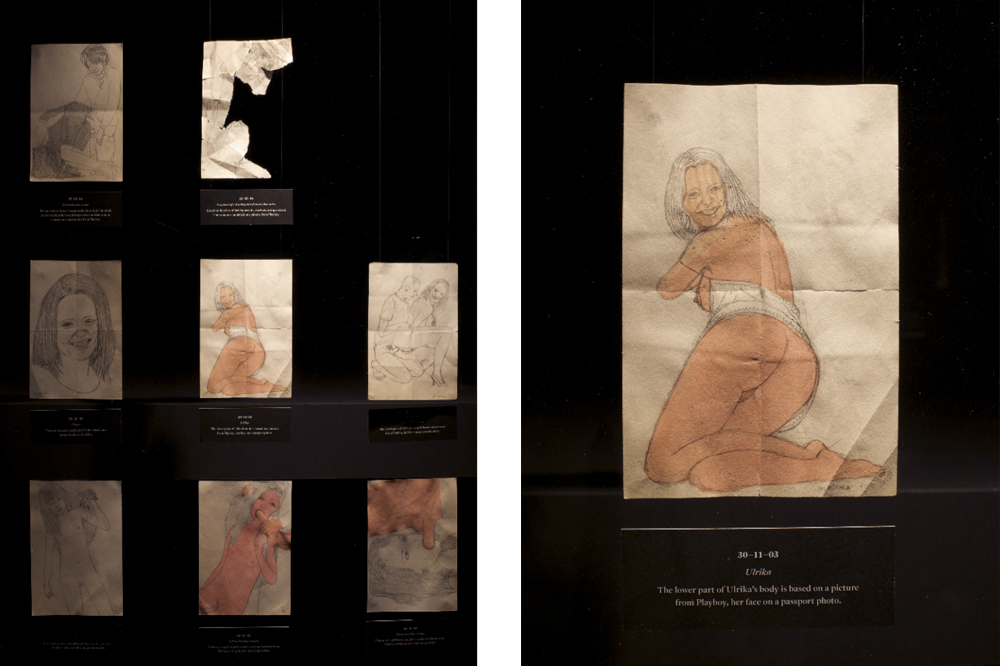 After passing his final exams at secondary school, Tim Enthoven works as a merchant seaman for a few months. His ship is the Spring Deli, a refrigerated vessel carrying bananas from Oranjestad (Aruba, Dutch Antilles), via Hamburg to Rotterdam. Tim mainly carries out maintenance work. He scrubs the decks and paints the bows. In his spare time he makes portraits of the crew, often without their knowledge. He also makes pornographic drawings.

When these drawings are discovered by one of the crew, Tim starts making pornography to order. The drawings feature the crew members as well as their fantasies. The representations are based on his comrades’ descriptions and on the occasional nudie magazine to be found on the ship. Over the course of time, the drawings become ever more intimate as the bond with his fellow crew members grows closer.When Tim leaves the ship, he manages to recover most of these drawings.

All pictures by Boudewijn Bollmann